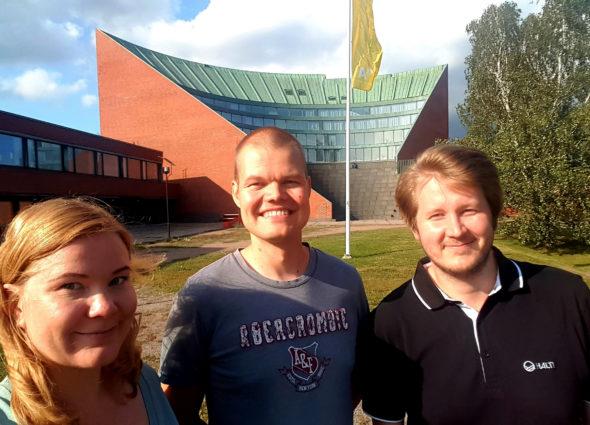 The idea of Vacuum Insulation System (VIS) is to utilize a technique called vacuum drying. This method provides ecological and cost-effective wooden construction elements which can be used in an extremely humid environment. These elements will also provide an excellent thermal insulation for the used structure.

With the use of vacuum drying, the VIS will be able to provide energy saving and cost-effective plant factories. Like glass greenhouses, plant factory is dedicated with the same basic idea of growing vegetables. Plant factory, however, is not dependable of the sunlight and the farming is carried out in the manner of vertical farming. That way the amount of flora grown in one square meter is easily multiplied.

The plants inside of the factory will use LED light as a source of photosynthesis, and vacuum dried elements will provide a perfect way to ensure optimal thermal insulation. Any excess LED light will bounce back to the foliage with the help of an aluminium outer layer of the structure. Because the material is vacuum dried, it will also withstand humid environment of the plant factory.

Background of the innovation

Behind the innovation is Pasi Herranen, who came up with the idea as he was making his master’s thesis in the Aalto University. In his research, Herranen studied the strength of plywood, which later became the main material of the element.

VIS team provided us a background information of the Vacuum Insulation System:

“The story of Vacuum Insulation System begun in 2013, when Pasi Herranen had an idea of lowering the pressure inside a construction element close to zero bars with the goal of achieving an extremely efficient thermal insulation solution that would at the same time be mold free.”

“While developing his idea, Pasi soon realized that by optimizing the inside geometry of plywood elements, it would be possible to build large-scale construction elements that would be strong enough to withstand a pressure close to zero bars. Pasi graduated from Aalto University in 2014 and continued developing the VIS technology on his own accord. Pasi’s old contacts at Aalto University kept helping him with improving the technology and building the first VIS element prototype.”

Herranen soon realised that he would need help to commercialize his innovation. Luckily, he had a good connections ready.

“In the spring of 2018, the project became officially an Aalto University effort when Assistant Professor Lauri Rautkari from Aalto’s department of Bioproducts and Biosystems recommended that VIS could join Aalto University and apply for a commercialization fund called TUTL.”

Perfect use for plant factories

As described earlier, plywood structure stands out from its competitors with its thermal insulation capabilities and the way the element withstands humid environments.

“These properties make VIS a perfect fit for the indoor farming structural solution and this is why our vision is to provide markets with the most energy saving and cost-effective Plant Factory. Plant Factories are all about efficiency: plants are grown vertically in multiple tiers to maximize space utilization, and all aspects of the environment are precisely controlled to maximize plant growth with minimum resource use.“

“Weather does not affect the crop yields in Plant Factories, since these facilities are completely isolated from the outside world and LED lights steadily provide the energy for photosynthesis. This enables us to create and maintain constantly optimal growth conditions every day of the year. Currently large-scale plant factories are made out of concrete and steel. We believe we can do better both ecologically and economically by producing large scale Plant Factories out of the wooden VIS-elements.”

Ecological innovation with a lot of potentiality

I was able to meet up with Herranen and Miettinen to discuss more about the VIS and plant factories.

Because a plant factory is almost fully closed microcosmos, it can be placed almost everywhere, even in the heart of a big city. On top of that vertical farming also makes the factory a space saving solution.

“It’s good to remember, that you cannot expand field areas forever. Vertical farming is almost the only option which can feed the ever-growing population. That means in the future we can start to grow forest in the place of fields”, Herranen points out.

It doesn’t really matter where the structure is located, thus it can provide local food even for the inhabitants of urban areas.

“You could even get a real local food in the Helsinki central. Imagine that!” Miettinen laughs.

Herranen and Miettinen point out that besides of food production, plant factories also provide a unique opportunity for researchers. Due to the isolation aspect and highly controlled environment, there are not that much variables taking place inside the factory. This means that scientists can collect data from all the plantation and get highly precise data. This is not possible inside of a glass greenhouse because the sunlight brings too much variables in to the equation.

Miettinen also reminds, that there is no need for pesticide inside a  plant factory. For that reason, food can be local and extremely healthy for the potential customer. It was surprising to learn that in a closed environment of a plant factory, the only real “bacteria bringer” is the human itself. In the not-so-distant future it is possible that robots and A.I. will do the job —thus further minimizing the amount of variables involved in the process and obtaining near-total isolation.

The vacuum drying has a lot of other potentiality aside of the plant factories. For instance, vacuum dried elements would make an excellent material for office buildings that are suffering from bad indoor air quality.

The next step for the VIS is clear. They are going to build their first plant factory as a pilot project. Construction is already underway, and everything should be ready during the spring of 2020.