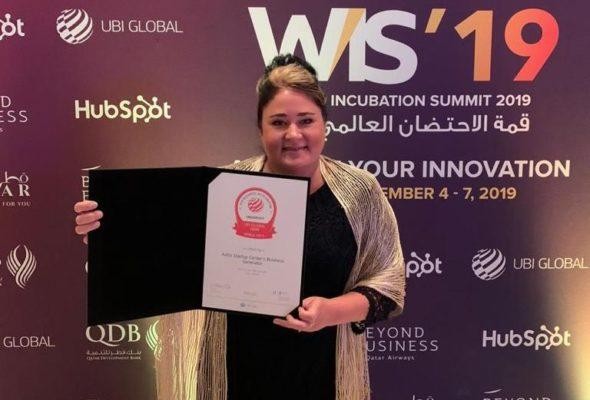 The Finnish Aalto Startup Center has been awarded among the top 5 university business accelerators. The world’s best business incubators and accelerators received their awards at the World Incubation Summit 2019 organised by UBI Global and held on 6 November 2019 in Doha, Qatar. This was the fifth time the biennial event has been held and Aalto Startup Center was now participating in it for the first time.

‘The entrepreneurial environment and attitudes towards entrepreneurship have become much more positive in Finland over the last 10 to 15 years. This makes it possible for Finland to have really strong expertise by global standards. In addition, we Finns are conscientious and hard-working people who are able to stay firmly focused on the core of the matter. We have learned to work with different people in different sectors and to see the benefits of cooperation,’ says Marika Paakkala, Project Director at Aalto Startup Center, in praise of the strengths of Finnish business accelerator activities

Alumni together have an annual turnover of nearly half a billion

The prize gala was preceded by a comprehensive World Benchmark Study carried out by UBI Global which covered 364 programmes operating in 78 different countries. The “University Business Accelerator” was one of six competition categories, and the Aalto Startup Center was allocated in the top 5 among the 36 university accelerators.

The excellent success of Aalto Startup Center in the ratings is based on factors such as the combined turnover of its alumni, totalling EUR 490 million in 2017, and the exceptionally sustainable foundation that these companies are on: 90% of those established in 2014 and 81% of those established ten years ago were still operational 2019. According to a study conducted by Statistics Finland, half of Finnish company ceases operations within five years. The companies accelerated by the Aalto Startup Center include Rovio, Futurice and Duunitori.

“Since starting in 1997, we have throughout our journey accumulated extensive experience in sparring companies in different sectors, but we still have to earn our place in the ecosystem time and time again. UBI’s recognition gives us faith that we have also been successful in showing entrepreneurial adaptability,” says Paakkala.

Aalto Startup Center has been operating in its current form since 2009, when the New Business Center and Arabus merged. According to Paakkala, this signified the combining of creative industries, business and technology all under the same roof. A year later, Aalto University was established and the accelerator programme was attached to it.

In 2017, Aalto Startup Center moved from Ruoholahti to Otaniemi, and a year later it settled in the centre for growth enterprises A Grid.

“Moving to the technology campus meant that commercial, creative and technological sectors were able to cooperate more closely. In addition, we have been able to establish a closer connection with student entrepreneurship. The A Grid environment has become a close community in which the objectives of different organisations connect with the needs of the start-ups. It is particularly inspiring to be able to provide even stronger support to research-based innovations,” Paakkala explains.

The award is based on scores given to business accelerators according to their effectiveness and performance. To determine effectiveness, UBI measures absolute results such as jobs created and maintained by current or recently completed customer companies. Performance refers to relative efficiency, such as the price of a job created and maintained.

Business accelerators were assessed in three categories: Value produced for the ecosystem, value produced for existing customer start-ups or alumni start-ups, and value produced for the accelerator programme itself. A total of 21 different criteria were used to evaluate activities, with each one focusing on either the short-term (1 year), medium-term (5 years) or long-term (10 years) – but with the majority (13) focused on short-term scoring. The weight of the criteria varied depending on the importance given to it by the academic consensus.

Aalto Startup Center (ASUC) is a business accelerator for start-up companies that are less than three years old, with a particular focus on the technological field. The accelerator utilises the interdisciplinary competence offered by Aalto University in design, business and technology as well as the expertise and networks of the university. The participants include companies both from within Aalto and outside of it, and the accelerator also creates business activities from research-based projects. Currently, there are about 40 companies at Aalto Startup Center, 10 of which operate under Esa Bic Finland, which is focused on space technology and a member of ASUC. Aalto Startup Center’s premises are located in Otaniemi, Espoo. https://startupcenter.aalto.fi/

Established in Stockholm in 2013, UBI Global is a company and community which specialises in global surveying, promotion and interconnection of business incubators and accelerators. The UBI network includes over 700 business incubators and accelerators from more than 90 countries, to which the company offers cooperation, benchmarking and research services. http://ubi-global.com/