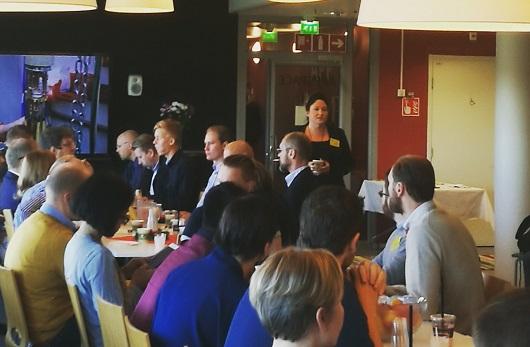 The brunch was a gathering of about 80 people from all walks of start-up ecosystem. There were budding start-ups, start-up enthusiasts, students, mentors, Aalto university associates, investors, partners and the likes. It was a great networking event which brought together several causes. We could see the enthusiasm and the energy of the group in the spontaneous conversations and networking. And, it was indeed beautifully done with healthy food.

Aalto Start-Up Center will be celebrating their milestone 20th anniversary very soon and so we can anticipate there will be some more exciting news in the near future. For starters, you can expect a strong presence of Aalto Start-Up Center at Slush 2017. ASUC start-ups, alumni and research and innovation projects will be very much a part of the biggest startup conference in the Northern Europe in the beginning of December.

The center will also move to A Grid at Otakaari 5, Espoo at the end of this year. A Grid is the next hub of Aalto’s talent base and this is what makes the move so significant. It is a win for Aalto Start-up clients and the Aalto community at large.

In addition, also the newly appointed advisor for European Space Agency Business Incubation Center (ESA BIC), Mr. Kimmo Isbjörnssund, introduced himself.  Kimmo told briefly about the possibilities ESA BIC will offer for startups and how the applications of satellite data will bring the space closer to us. The business incubation center will start operations in A Grid as part of Aalto Start-Up Center in the near future.

Aalto Start-Up Center team would like to thank everybody who graced the event with their presence. Until we meet again!