The first intake, which opened in early March, received 28 applications in total. The applicants had business ideas in the fields of media, gaming and performing arts.

The Aalto Digital Creatives program hopes to reach practitioners from different branches of the creative industries. This aim is represented by the variety of projects that were accepted into the program. All participants work with their unique ideas of how to fuel creative industries by utilizing digital tools.

Among the first batch participants there are three projects geared towards the film and television industry: a collaborative platform enabling co-creation for filmmakers; a decentralized distribution network leveraged by blockchain technology and an upgraded primetime television format which uses motion capture for an added visual impact.

One of the participating teams is working on a single-player first-person movement shooter game with an immersive story. The game is set in a unique fantasy world as it explores currently prominent topics of environmentalism, existentialism and uncertainty.

Two teams are focusing on media platforms but from different angles. One team is working on expanding their already established audiovisual channel which introduces the Finnish creative culture for a Spanish speaking audience. While another team aspires to take storytelling platforms to the next level by adding a layer of interactivity.

As Aalto University is well-known for its technology-focused business accelerator services, the aim of the Aalto Digital Creatives pre-incubator is to create an additional entrepreneurial path which is based on creativity and intellectual capital. The Aalto Digital Creatives pre-incubator is a part of the Campus Incubators program supported by the City of Helsinki. Aalto University is one of six higher education institutions which form the extending network of campus incubators.

The Aalto Digital Creatives program runs twice a year. The call for applications is currently open and its deadline is on 11.9.2022. Applications are encouraged from teams or individuals who have an idea for business and a background in the creative industries. The business ideas could be about new methods and formats for audiovisual storytelling; technology-enhanced art, design and entertainment; augmentation of human creativity through computational methods or creation of novel interactive experiences. The applicants don’t need to have previous business experience, the emphasis is on the idea and the willingness to develop it further. 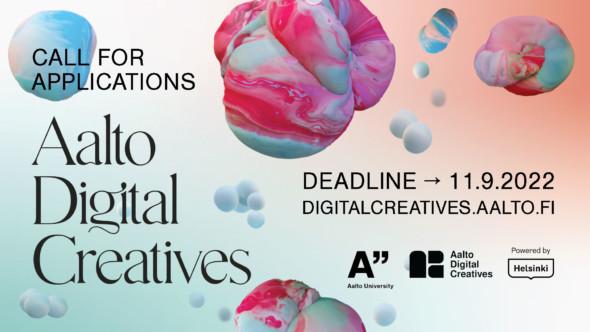 For more information and how to apply, visit: https://digitalcreatives.aalto.fi